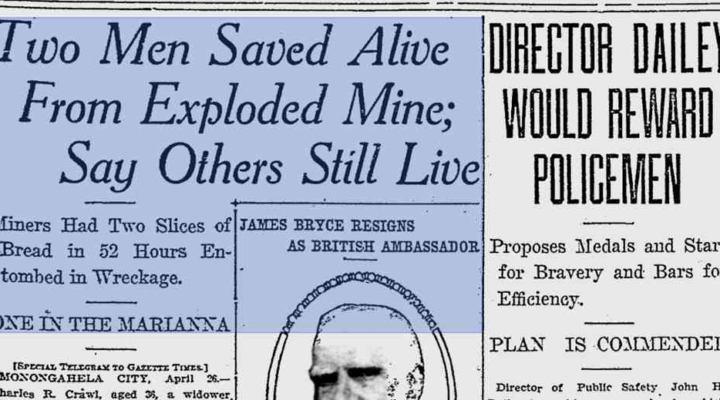 Successful Mine Rescues in October

1897 — October 30, 1897 – Joseph Yomaski, one of the men entombed in the Von Storch Mine of the Delaware and Hudson Company, was rescued at 10 o’clock Saturday night.  The bodies of the other men were afterwards found and brought to the surface.  In an interview, the Pole explained that when his companions began to suffer their death agonies, he at once urged them to follow him, but they refused.  He escaped to an old airway where he knew of a hand fan, over which he placed a box, and in that inserted his head.  He then kept the fan going forten hours and kept himself alive until rescued. See more.

1913 — Seven Mexican miners, trapped for 6 days in the Vogel and Lawrence Lignite mine at Rockdale, Texas were found unconscious, and barely alive.  The men were imprisoned by a cave-in following a cloud burst which flooded the mine.  Laying near the men was their mule, still alive. Source document.

1913 — Trapped in an abandoned chamber of the Continental Mine operated by the Lehigh Valley Coal Company in Centralia, Pennsylvania, Thomas Toshesky was finally freed by rescuers after 8 days.  He was in good condition and spirits, refusing a stretcher and making it out of the mine under his own power. Source document.

1914 — Explosion in Mulga Mine, Mulga, Alabama – Sixteen men were killed and 12 were rescued by parties led by company officials.  Source document.

1914 — Explosion at Patterson No. 2 Mine, Elizabeth, Pennsylvania – Following the explosion, the superintendent and the pump man were overcome by afterdamp.  A rescue party in the charge of the mine foreman carried the unconscious men to fresh air.  The superintendent soon recovered, but the pump man could not be revived.  Breathing apparatus was not used. Source document.

1914 — Royalton North No. 1 Mine Explosion – An accumulation of gas was ignited by open light.  Doors to an old room were left open and gas accumulated.  One man was rescued from the affected area 10 hours after the explosion had occurred.

1931 — Two miners who never gave up hope after 4 comrades were killed in an explosion in the Mocanaqua Mine of the West End Coal Company were rescued after 133 hours of entrapment.  The survivors were John Thomashunis, age 40, and John Metz, age 22.

1935 — Mine workers who worked all night, rescued one of two men entombed in a “bootleg” coal mine, 2 miles south of Mt. Carmel, Pennsylvania. Source document.

1938 — Falling slate blocked the exit from a room where Dolar Johnson, 54, was preparing to blast in the Lilly Meade Mine in Owensboro, Kentucky.   When his lamp became extinguished, he realized he was lost and he decided to sit and wait for rescue.  He was safely brought to the surface 4 days later. Source document.

1954 — Nearly freed from fallen timber and rock in an Anthracite mine in Branchdale, Pennsylvania, Carl Herman became trapped again when a second cave-in occurred.  35 friends worked for an undisclosed period to free Herman who managed to get out with only a broken leg. Source document.

1958 — Bishop No. 34 Mine Explosion – An explosion occurred in this mine and resulted in the death of 22 miners.  Thirty-seven others erected barricades and remained behind them until they were rescued.

1980 — Two men, David Aubuchon and Guy Hayton, and the car they were driving were rescued after spending 4 days at the bottom of a vertical shaft of the University of Arizona experimental mine near Tucson.  They had crashed their car through a barbed-wire fence protecting the shaft entrance.  Following their rescue, the men were questioned by Pima County Sherriff’s detectives about the burglary of $700 worth of tools from the mine.  Apparently no charges were filed. Source document.

1987 — Rescuers worked for 58 hours to free “Baby Jessica” McClure from an eight-inch (20 cm) well casing 22 feet (6.7 m) below the ground.  The story gained worldwide attention (leading to some criticism as a media circus), and later became the subject of a 1989 television movie Everybody’s Baby: The Rescue of Jessica McClure on ABC.  As presented in the movie, a vital part of the rescue was the use of the then relatively new technology of waterjet cutting. See more.

1987 — Five miners trapped for more than a day were hauled 800 feet to safety in a bucket about the size of a garbage can.  The became trapped when a cable suspending a 3-ton piece of machinery snapped, sending the equipment and debris plunging into the Diamond gold and silver mine at Leadville, Colorado.   The mine was owned by the Leadville Corporation. Source document.

1913 — Dawson No. 2 Mine Explosion, Dawson, New Mexico — Of the 284 men working in the mine, 14 men escaped from an unaffected area of the mine, and nine others, unconscious at the bottom of the shaft were later rescued by a crew wearing apparatus.  Two helmet men, James Laird and William Poyser, were lost that night when they overtaxed the oxygen supply by overexertion and going in farther than instructed.  The oxygen was supplied at a fixed rate and when they tried to remove the oxygen bottles to breathe from them, they were overcome by afterdamp. Source document.

1916 — Jamison No. 7 Mine Explosion and Fire, Barrackville, West Virginia — Lewis M. Jones, a mining engineer from the U. S. Bureau of Mines in Pittsbugh became asphyxiated in the Jamison No. 7 Mine fire at Barrackville, West Virginia. When Jones and seven others failed to return to the surface, additional rescuers were dispatched to bring them out.  All of the initial party recovered except Jones.  9 other miners lost their lives in the disaster. Source document.

Related incident:  On November 13, 1917, Samuel T. McMahon and Bryce Warren lost their lives while wearing Fleuss oxygen breathing apparatus in a sealed fire area in the No. 7 mine of the Jamison Coal & Coke Company, Barrackville, West Virginia.

1916 — Marvel No. 2 Mine Explosion, Marvel, Alabama — Eighteen men entered the mine and all were killed in the explosion, except one pumper who was burned but escaped.  A rescue worker without rescue apparatus was overcome and was killed by a fall from a ladder.

1970 — Open-Pit Uranium Mine Electrocution, Texas — A miner was electrocuted when he drove a portable drill rig with the mast up into a high voltage powerline.  In an attempt to rescue the truck driver, another miner was also electrocuted.

2002 — Storm Decline Exploration, Elko, Nevada — Team trainer, Theodore Milligan and team member, Dale Spring were fatally injured when they collapsed from excessive heat while evaluating the conditions in an inactive gold mine.  The pair’s failure to have coolant cartridges installed in their breathing apparatus was identified as a principle contributing factor.