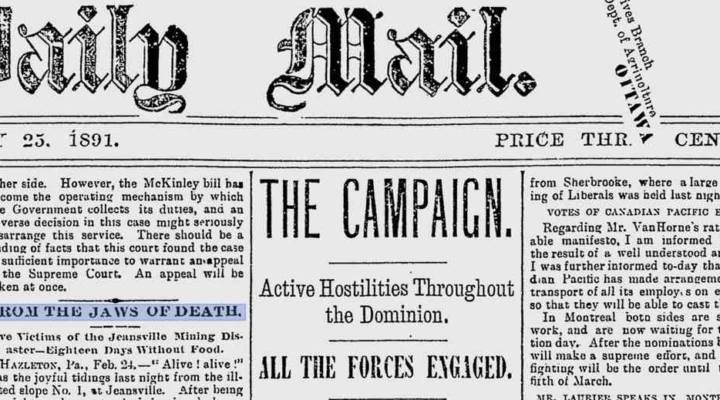 Successful Mine Rescues in February

1891 — 13 miners died in Jeanesville, Pennsylvania after they were trapped by water in the Spring Mountain No. 1 Mine operated by J. C. Hayden and Company on February 4, 1891.  Four others were rescued 19 days later.  They were John Tomaskusky, Joe Mautchwitch, Bosso Franko, and John Berno.  Source document.

1891 — Following the firing of a blast, water rushed into the Susquehanna Colliery at Grand Tunnel, Pennsylvania trapping Michael Schilling, William Cragel, and John Riner.  Freedom from the flooded mine came for the trio when rescuers found them after 115 hours.  They had to wait out the 4 days perched on a piece of timber 3 inches wide.  When found, the men were almost completely exhausted and would require care to bring them through.  Source document.

1908 — All but one of 28 men and boys who were entrapped in the Mid-Valley Colliery near Shamokin, Pennsylvania were rescued after 1 day.  Frank Orloskie, fell down a chute after the accident and was killed.  Source document.

1912 — With 140 rescuers tearing at the rock and earth blocking the shaft of the Bunker Hill Mine at Sutter Creek, California, freedom came at noon on February 8 for sixty-two miners trapped for 23 hours.  Wives and daughters of the trapped men held torches through the nights while rescuers assailed the jam.  Source document.

1914 — Cannon Mine Inundation – Andrew Churnick, 50, was killed by a inrush of water and gravel in No. 11 chute on the water level in the Gem seam.  His body was recovered 4 days later near the first crosscut in the No. 12 chute.  His partner, Mike Bobchurnick, was rescued after being imprisoned for 7 days near the 6th crosscut in the same chute.

1915 — Explosion at Carlisle Mine, Carlisle, West Virginia – Twenty-one men were killed and four were rescued by parties led by company officials.  Source document.

1927 — Joseph Schultz, a miner at the Henry Clay Colliery near Shamokin, Pennsylvania was entombed 4½ hours in a blind heading after a pillar crumbled when disturbed by a shot.  He was penned behind hundreds of tons of coal and rock in a space about 3 feet wide and 6 feet long.  Rescuers found him exhausted.  Source document.

1928 — One miner was found alive after an explosion at the Kinlock underground coal mine of the Valley Camp Coal Company in Parnassus, Pennsylvania near Pittsburgh.  The rescued miner was trapped for nearly 1 day.  12 miners were killed in this accident.  (Parnassus was later renamed New Kensington).

1937 — Robert Johnson spent eight days without food in utter darkness in an abandoned Flemington, West Virginia coal mine.   Guided by his weak cries, Bill McDonald, Minor Cleavenger and Lon Smith found the man and brought him out on a stretcher.  Source document.

1899 — Diamondville No. 1 Mine Asphyxiations, Diamondville, Wyoming — Ten brave men were risking their lives endeavoring to reopen the Diamondville No. 1 coal mine.  They were all knocked down, one by one, by blackdamp.  When help arrived, two were already dead, and the others were resuscitated with great difficulty.  The names of the dead are John L. Russell and Lee Wright.  Source document.

1911 — Cokedale Mine Explosion, Trinidad, Colorado — On February 9, 1911, E. A. Sutton, assistant superintendent of the Cokedale mine of the Carbon Coal & Coke Company, Carbondale, Colorado, lost his life while wearing a Dräger helmet-type oxygen breathing apparatus after an explosion in this mine in which 17 men were killed.  It is believed that this was the first instance in the United States, wherein a person died while wearing oxygen breathing apparatus.

1911 — Belmont Mine Fire, Tonopah, Nevada — William A. “Big Bill” Murphy, a 28-year-old cage operator, twice successfully descended into the Belmont Mine inferno to bring confused and unconscious co-workers to the surface.  Said to say “he was nearly done in,” he made his third descent into the mine.  This would be his last.  In 2006, a statue was erected and dedicated in Tonopah to “Big Bill,” the hero of the Belmont Mine Fire.

1916 — Pennsylvania Mine Fire, Superior, Arizona — Approximately 195 men were hoisted to the surface in less than 45 minutes after the discovery of the fire.  Six men escaped through the 1,000-foot level to the Tramway mine.  Subsequently, two men lost their lives while wearing Dräger apparatus during rescue and recovery work.

1921 — Sahara No. 8 Mine Explosion, Illinois — Three men lost their lives by suffocation in oxygen apparatus while opening a fire sealed area to see if the fire was extinguished.  The oxygen of one of the three man crew was fully consumed and the two other men used up all their oxygen in attempted rescue of the one man who went down.

1926 — Nelson Mine Explosion, Nelson Creek, Kentucky — Immediately after the blast, Cecil Fulkerson, manager, led a squad of rescue men into the pit.  With him were Archie and Leonard Huter and George Brandon, Jr., whose fathers were killed in the explosion.  Archie Huter, Brandon, and two others were asphyxiated by black damp.  Fulkerson and Leonard Huter were overcome by the gas and their condition was serious.

1930 — Standard Mine Explosion, Standardville, Utah — The three men in the connected No. 3 mine were killed by the forces, and 17 of those in No. 1 mine died in the afterdamp.  Five of the men in No. 1 mine successfully barricaded themselves and were rescued.  Three men of a fresh air crew were killed by a falling roof slab on February 7.  Source document.

1943 — C. F. H. (Mulcaby) Mine Cave-in, Shullsburg, Wisconsin — Two of the victims were buried in an initial collapse, which occurred while they were preparing to shoot down a section of the rock suspected of being weak.  Six others were buried in a second cave-in, which occurred while they were attempting to dig out the bodies of the first two men.

1943 — Smith No. 3 Mine Explosion, Bearcreek Mountain, Montana — One rescuer later succumbed from the toxic gas, after spending days looking for the miners.